Bayeux - town of war and remembrance

Bayeux is an attractive provincial town in Lower Normandy. However this small settlement near the coast has bloody connections to two of the most significant battles in Anglo-French history.

An 11th century breach of promise led to the Norman forces taking their grievance across the English Channel and changed the course of politics and history in England forever.

Nearly nine centuries later the British and their Allies returned in the Normandy landings which helped to bring an end to World War II. Bayeux was the first town freed in France and was temporarily the provisional capital of the country.

Originally Bayeux was a Roman town (the headquarters of a Roman legion) and, as Roman power declined, it was subject to invasion and pillage by a series of Germanic and Nordic occupiers. 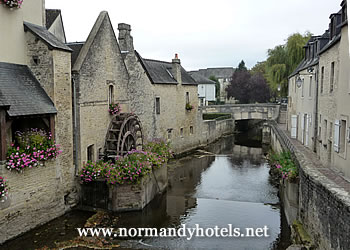 The Normans under William the Conqueror and his half-brother Bishop Odlo helped to fortify the town and built the cathedral which still stands at the centre of the town. The tapestry named after the town tells the story of the Norman victory over the English forces in 1066 and acts Norman propaganda providing their reasons for the war.

Bayeux lost out to Caen as the capital of the new Norman-English rulers. The success of the Norman invasion of England didn't help the inhabitants of Bayeux. The links between France and England meant the town suffered severely during the Hundred Years' War as the forces moved backwards and forwards.

The other major invasion involving English forces was in the other direction towards the end of World War II.

Bayeux is the first sizeable town to the south of the Lower Normandy beaches. The German army occupied and garrisoned the town and surrounding area. The June landings on Gold beach freed the town on June 7 (the first town on mainland France).

Bayeux fell with little resistance as the German forces were concentrating on defending Caen. The Allied forces later used the undamaged buildings in the town for the care of injured from other parts of Normandy.

A week after the liberation, General De Gaulle visited the town and set up the Provisional Government in the municipal buildings.

Bayeux is in the Calvados department of Lower Normandy. Bayeux is the capital of the Bessin region, the coastal area between the town and the English Channel.

It has just under 14,000 inhabitants. The Bayeux tapestry, the military cemetery and the convenient location for D-Day beach visits make it one of the most important tourist destinations in Lower Normandy.

Bayeux has twinning arrangements with several towns across Europe, most notably with Dorchester (UK), Eindhoven (Netherlands) and Viborg (Denmark).