Deauville is, in a way, the precursor of that tourism invention: the man-made holiday resort.

There had been a settlement in the area of Deauville for centuries before it became a resort for the rich at play in the 19th century.

The original location of the small village of Deauville was up on the slight hill to the south of the current town centre - down below was marshland and the tidal flats.

Deauville and the Duc de Morny

The Duc de Morny was a rich and extremely well-connected businessman and statesman in the second half of the 19th century.

The idea of bathing and going to the seaside had become popular in the early part of the 1800s. (Dieppe was the first real example of a beach 'resort' on the Normandy coast.)

In the latter half of the century a number of investors developed facilities to attract the upper and monied classes and turned coastal villages into resort-style towns. Trouville on the other side of the river actually got a head start with the development of a long jetty where steamships could tie up and visitors could promenade along the beach. Other Norman resorts, such as Cabourg and Villers-sur-Mer were developed in the 1850s.

Thus the idea of the Duc to drain the marshes between the old town and the sea was not a wild idea but part of a pattern of coastal development in this area. The Duc had first visited Deauville in 1858 and, in conjunction with local investors and in only four years - most of the work took place from 1860 to 1864 - he organised the draining of the marshes and the construction of a railway line, port, accommodation for visitors and the racecourse which would become one of the landmarks of the town.

Then, in 1865, the Duc died and countrywide economic and political problems prevented further immediate development. He left however the legacy of the resort and was an extremely important figure in the development of horse racing and breeding in France.

Deauville's history has a number of stops and starts.

Violent winter storms in the 1870s led to the formation of a gravel bank off the old beach and extended the flat open area in front of the seafront villas. The wide beach area and open flat land behind it has now become one of the defining features of Deauville. 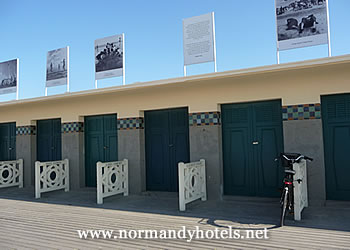 The Belle Epoque period up until the First World War saw many of the grand hotels being built, as well as the famous Deauville Casino (thought to be the model for the Casino Royale in the first James Bond book). Coco Chanel also opened her first clothing boutique in Deauville in the pre-war years.

The large hotels were used for convalescent homes for wounded soldiers in the First World War but the resort rebounded from the wartime years during the Roaring Twenties, with the return of the artistic and wild 'set' of that time.

The famous wooden promenade along the beach was laid in 1923, a second racecourse was opened in 1928 and the nearby airport (actually closer to Trouville) was founded in the 1930s.

Once again, the success of Deauville was destroyed by the war years and, with the years of austerity following, it took until the 50s and 60s for Deauville to start to recover the cachet that it had once possessed.

But the resort once again became popular with an artistic set, this time from the world of film, helped by the feature placement of the resort in the successful 'A Man and A Woman' in the Sixties and the astute creation of an American Film Festival in the autumn.

Deauville is located on the coast of Lower Normandy across the river from its neighbour Trouville-sur-Mer.

It has a permanent population of around 4000, but this is swelled by visitors during the summer season and the film festivals.

The town is twinned with the horse-racing centres of Lexington in the USA and Kildare in Eire, with the sailing town of Cowes in the UK, and with the small Lower Saxon town of Eicklingen in Germany.