The main attraction of Deauville is of course the famous beach with its boardwalk and brightly-coloured parasols and canvas tents. Any visitor to the resort should take a stroll along the wooden boards and spy out the famous Hollywood names on the beach cabins, as well as enjoying the sea air as the first tourists did nearly 200 years ago. 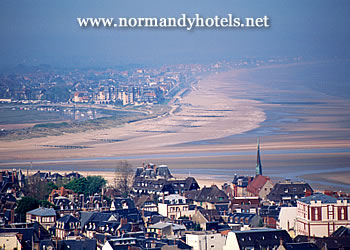 The villas and grand hotels built in the 19th and early 20th century are a nice backdrop to a stroll around the town, but don't really offer much more to those who are not students of architecture.

The Casino Barrière de Deauville was created back in 1912 and now belongs to one of the largest luxury tourism businesses in France (Barrière specialises in casinos, upmarket hotels, golf courses and horseracing.)

This isn't the original Deauville casino, however. That was built back in the 1860s as part of the rapid growth of the resort. The current casino was originally the Grand Hôtel du Casino. It was redeveloped after the Deauville functionaries realised that they were falling behind Trouville across the river and asked the head of the casino there to set up a similar one in Deauville. 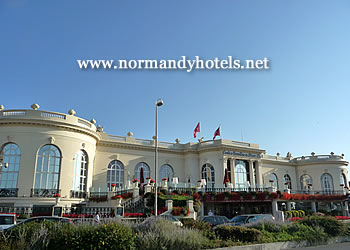 The gaming rooms are inextricably linked with the myth of film and history. Film myth from the associations with James Bond and Casino Royale or historical mythology from the 1970s, when Jacques Mesrine, France's Public Enemy Nr. 1, held up the casino.

The casino also hosts the Deauville theatre, decorated in the style of 18th century Italy, and a cinema, which is used for some of the events during the American Film Festival in September.

The Duc de Morny, who was responsible for the expansion of Deauville in the 1860s, was also extremely interested in horse breeding and racing. 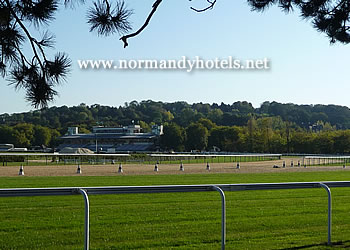 Since that time, the area around Deauville has become something of a centre for equine sports and business, with a large equestrian complex (the 'Pôle International du Cheval') being built in 2010. The racing itself used to only take place in August - now there are more than sixty days of races in the year.

La Touques is one of the most prestigious flat racing courses in France. Clairfontaine offers flat racing and steeplechase.

The Deauville tourist office is located in the main part of the town back from the beach and boardwalk areas.