Dieppe is a part of France where any visitor to the more popular southern English beach resorts would see some similarities.

Sure, instead of 'fish and chips' there are 'moules frites' (mussels and chips, a speciality of northern France) on the menu, and the 'tea like mother makes it' turns into a carafe of white wine. But, for a French town, Dieppe has a bold and brassy ferry port and fisherman's air to it... and is none the worse for it. 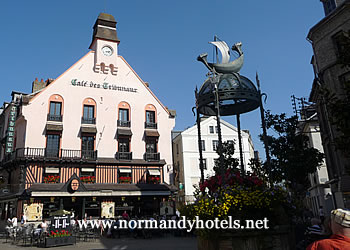 Of course, Dieppe has a lot more to offer - see below - but it is a Channel port and resort with miles of beaches and plenty of restaurants and bars and has the consequent weekend stream of traffic in the town which hails from the bigger cities nearby.

The History of Dieppe

There was originally a Roman encampment located near Dieppe, but the name of the town comes from the later settlement by the Vikings. Dieppe comes from the Norse word for 'deep', referring to the good harbour that they had discovered for their trade and warships.

The importance of the town increased after the Norman invasion of England, with the cross-Channel communications and commerce, but it also meant that the town fell victim to the regular wars between the English and French kingdoms and it was destroyed or badly damaged a number of times.

Dieppe was always a prominent maritime town and navigators and explorers that set sail from here played a major part in the French expansion into Africa, Asia and the Americas.

After the end of Napoleon's rule at the start of the 19th century and the restoration of the monarchy, the concept of beach resorts for the leisured classes started to take hold. Dieppe became one of the first of these resorts popularised by the nobility, but the ease of access provided by rail connections soon democratised the 'seaside holiday' and also attracted a healthy number of the artists and writers who lived within reach.

The Dieppe Raid and Canada

Dieppe had been occupied by German forces in 1940. Two years later, the Allied forces attempted a major seaborne attack on the town known as Operation Jubilee (and commonly referred to as the Dieppe Raid).

The raid, which consisted mainly of Canadian troops with smaller detachments of British commandos and American Rangers, was a disaster despite the bravery of many of the participants. More than three and a half thousand Allied troops were killed, wounded or captured. The Allied air forces, which had wanted to draw German aircraft into a pitched aerial combat, also suffered heavy losses. 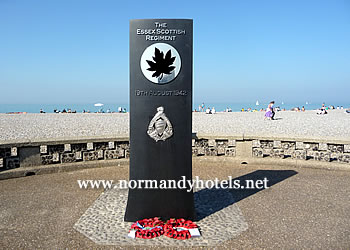 Wartime leaders such as Mountbatten later claimed that the raid contributed to the success of the subsequent Normandy landings.

More than 700 Canadian soldiers are buried in the military cemetery to the south of the town, as well as more than 200 other nationalities. The town of Dieppe in the Canadian province of New Brunswick was named to commemorate the raid (it had been called Léger's Corner previously) and the similarly-sized communities have a town twinning arrangement between them.

Dieppe is a large working port on the coast of Upper Normandy in the Seine-Maritime department. It has a declining population of around 33,000.

It is one of the major Channel ferry connections with the UK, with a service to and from Newhaven, although this has been subsidised by the local French administration.

Dieppe has what the the tourist office describes as a 'charter of friendship' with the town of Dieppe in Canada (see above in Dieppe Raid and Canada). It has close links to English city of Brighton (also one of the first beach resorts), although is not twinned as Brighton and Hove authority has an official policy against town twinning.