As well as the long and popular beachfront area and the crowded cafes and restaurants around the harbour, Dieppe has plenty to see and do resulting from its eventful history.

The Vieux Château is located to the west of the town in an elevated position on a hill. These fortifications were originally started in the 14th century on the site of earlier efforts to protect the town against raids from the sea. The castle was expanded in the 15th century after Dieppe was liberated from English occupation. 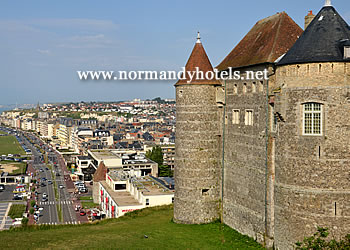 As the threat from invasion disappeared in the centuries that followed, the castle became a residence for the local bigwigs, a barracks for troops stationed on the coast and, during the French Revolution, a jail for political opponents. It was eventually purchased by the town after the First World War and now acts as a museum and art gallery.

The museum has an important collection of ivory and pieces from the town's maritime history, as well as a display of various works from the artists who painted the northern Norman coast in the 19th century. The castle is open every day of the year apart from main public holidays.

The Église St-Jacques is at the heart of the Quartier St-Jacques, the market area of Dieppe, and on the old pilgrimage trail (Chemin de St. Jacques) to Santiago de Compostela in northern Spain.

It was built on the site of an older church in the 13th century and was extended in the 15th and 16th centuries, as well as later in the 19th century.

The Èglise Saint-Rémy was constructed later than its neighbour. It is located between the castle and the Church of St Jacques.

Work started in the 16th century and was continued in the next century. Intervening wars, revolutions and bombardments meant that it was only finally completed in the 19th century.

These are the surviving towers of the old fortifications around the town which were originally built in the 14th century to protect the population. The towers would have been the western port gateway.

The cemetery for the dead of the operation known as the Dieppe Raid (described on the main Dieppe page) is situated a short way outside the town limits to the south just off one of the main routes out of the town in the community of Saint-Aubin-sur-Scie. The cemetery holds just under a thousand war graves, the majority Canadian with some British. It was originally created by the German military during the Second World War and thus is laid out in the German style. (To find the cemetery on the map below, use the zoom out feature on the left hand side.)

The Dieppe tourist office is located near the tourist port and the railway station.