Étretat is a small coastal town made famous in the 19th century by the Impressionist paintings of the chalk cliffs which bookend the shingle shore.

It is located on what is termed the 'Alabaster Coast' in the Pays de Caux region of Upper Normandy. 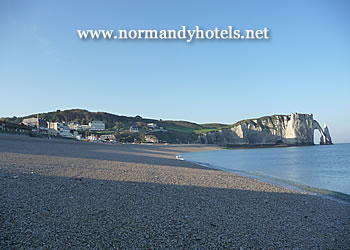 Originally a village of fishermen catching herring and guarding oyster beds, in the 19th century it became one of the most popular locations for a day trip out of Paris (and other industrialised centres) to take the sea air and to admire the scenery.

The reasons can be seen at either end of the beach - the Falaise d'Aval and the Falaise d'Amont, two spectacular chalk cliffs with natural arches in them.

The idea of bathing resorts had become popular in the 19th century amongst the rich, but improvements in working conditions (days off, for example) and increasing middle-class prosperity also put places like Étretat in reach of a wider public.

Transport improvements also helped - the coastal road between Fécamp and Le Havre meant that a bus service could be introduced and, by the end of the 19th century, a train was running to the town.

Fishing was also dying out, so Étretat gave itself over to tourism. The Impressionist painters, notably Monet, also helped to popularise the area and, for a while, it enjoyed a heyday with the building of the casino and some luxury villas.

The 20th century, however, was a century of change. Étretat suffered as people took advantage of increasing prosperity and improved travel connections and began to find attractive holiday locations further afield.

The Second World War resulted in the destruction of the old seafront, although it has since been renovated. Tourism is once again on the rise, but mainly with an international public, driven by the popularity of those Impressionist paintings.

Étretat can get very crowded in high season - the roads are still narrow and struggle to cope with the amount of visitors on busy days.

Just about every visitor will want to take a walk on the shingle beach (remember that it is illegal to take stones from the beach - it acts as a natural breakwater). It is worth checking with the tourist office (details below) beforehand to see when high and low tides are and especial care with the tides should be taken if walking out towards the rock formations. 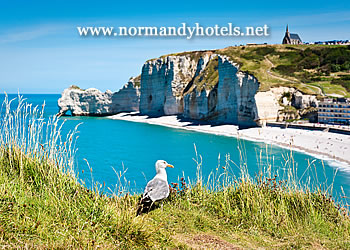 There is a promenade, the 'perry', along the front above the beach and a number of decent restaurants on or near the seafront. It is also possible to climb steps to the top of the cliffs at either side of the town - at the top of the Falaise d'Amont there is a small chapel.

Hôtel Dormy House
Route du Havre
76790 Étretat
Tel: 02 35 27 07 88
A self-described 'boutique hotel' with a three-star rating situated on the cliffs above the town and beach of Etretat. Not cheap but visitors rave about the stunning views.
Check Availability

Étretat is situated on the coast of Upper Normandy to the northeast of Le Havre, the nearest big population centre.

It has a permanent population of just over 1500, but permanent residents are swamped with day trippers and holidaymakers in the summer months.

Étretat was once on the train line (a boon for its tourist development). However the old line is now only used by a tourist train between Les Loges and Étretat in the summer months. As far as official publis transport goes, a bus service connects the town to Le Havre and to the village of Bréauté (which is on the Paris-LeHavre rail line).

For car drivers, the most direct access is via the coastal road, if coming north from Le Havre, or via the A29 and then across country roads if arriving from the east or the Rouen direction. Many tourists with a car will link a visit to Étretat with a journey on the Upper Normandy coastal road and take the chance to see the abbey at Fécamp and the sights of Dieppe.

The Étretat tourist office is situated just off the main town road on one of the main public car parks.