Honfleur is one of the most attractive locations in the whole of Normandy. Situated where the Seine meets the sea, Honfleur has long been a favourite place for visitors to the region.

It has an important historic old port and is surrounded by lovely farming country, very typical of the Pays d'Auge region, but also offers views down the Seine to the modern bridge linking Lower Normandy to the industry and busy port facilities of the big city of Le Havre. 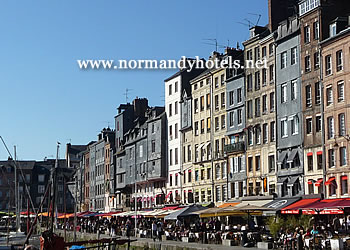 The first written mention of the port is found back in the 11th century and by the 1200s it had already grown in importance because of its position at the mouth of the Seine. The river is one of the most important in France and it was important because of the fertile terrain inland and the possibilities of trade with the communities along the river.

For that reason it was fortified against the old enemy, the English from across the Channel, but that didn't stop it being occupied by the invaders on a number of occasions during the Hundred Years' War. For their part, the French forces used it as a base to raid the English ports along the south coast.

Following the war the port continued to grow in prosperity and economic importance, mainly due to the shipbuilding industry. Another round of wars, this time the wars of religion around the Reformation and Counter-Reformation, affected the trade prospects of the town, but they were also helped by Honfleur becoming the base for expeditions to the North American continent and the subsequent connections to the settlements over there.

The town's economic decline was partly a result of the loss of the French settlements in Canada and what is now the USA and partly because of the expansion of the rival port of Le Havre on the other side of the river.

Honfleur was one of the few Norman settlements to escape damage during the Second World War.

Honfleur and the Impressionists

The romantic remains of the old port and its fortifications and colourful houses attracted artists in the 19th century, among them Turner and the predecessors of French Impressionism.

The painter Eugène Boudin was born in Honfleur and is credited with helping a young Claude Monet to switch to landscapes. Some of the most famous Monet works from the Honfleur area are of course maritime scenes, but he also painted the narrow streets of the town and winter scenes from the surrounding countryside.

Honfleur is the administrative centre of the canton of the same name in the departement of Calvados in Lower Normandy.

It has a permanent population of just over 8000 inhabitants - the population has been declining since the 1960s, although it appears to have stabilised in recent years.

It is twinned with Sandwich, across the English Channel in Kent and a place which the armed forces of Honfleur once burnt to the ground in the 15th century, as well as with Honfleur in Quebec, Wörth am Main in Germany and the shipbuilding city and port of Onomichi in Japan.