The biggest city in the whole of Normandy, one of France's largest ports and a UNESCO World Heritage Site - and yet still Le Havre has to work hard to get much love from visitors.

Some of that probably has to do with the very visible port infrastructure around the city, with containers, chimneys, cranes and fuel tanks, as well as the Modernist style of rebuilding that took place after the destruction towards the end of the Second World War.

Still, a city this large has more of interest to see and to do than most people passing through the ferry port and via the fast road on the bridge over the Seine might appreciate. 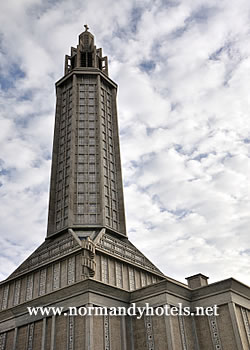 'Le Havre' actually means 'the harbour'. Le Havre, with its position on the coast and at the mouth of the Seine, was perfectly positioned to take the role of the older ports (such as Honfleur on the other side of the river) whose deep-channel routes were silting up.

It was founded in the 16th century by the French king at the time. He wanted a replacement for other ports on the Seine that were silting up. Despite repeated improvements to the port, it suffered a number of occupations and attacks by the English over the period stretching from the French religious wars between the Huguenots and the Catholics and the time of Napoleon.

After the fall of Napoleon, the trading ties with America increased and the port expanded to deal with the amount of traffic passing through.

However, the Second World War virtually destroyed both the port and the town. In 1940 Le Havre was attacked by the Germans and then in 1944 it was almost flattened by Allied bombing following the Normandy invasion.

Five thousand inhabitants are estimated to have been killed before the town was eventually wrested back by the Allied forces. They cleared away much of the rubble and used it as one of the major resupply ports during the rest of the war.

Auguste Perret was a Belgian architect and he is the man most responsible for the way that Le Havre looks today.

Following the destruction of the city during the Second World War, the decision was made to offer the task of reconstruction to the lead practice of L'Atelier Perret. The idea of rebuilding the city was seized upon by Perret, who was one of the leading practitioners of the Modernist school of architecture at the time.

He decided that the centre of Le Havre should be renewed with the use of structures made principally from reinforced concrete. Despite the fact that the the city had been practically razed to the ground - and also possibly going against his own Modernist philosophy - Perret decided to keep the historic transport axes through the city and to use the historic grid of streets where some old buildings remained. 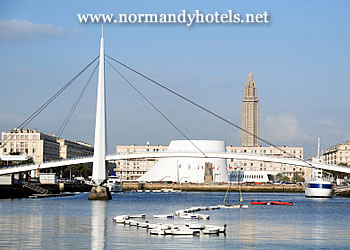 However, other parts were laid out in a modular grid system, with the aim of creating a unified urban redevelopment which included living space, public buildings and commercial enterprises and reducing the density of the population dramatically.

The 'official' period of reconstruction lasted through to 1964 (Perret, who was 70 when he started the project, died ten years earlier) and the end was marked by the consecration of the Church of St Joseph.

Le Havre was made a UNESCO World Heritage site in 2005. UNESCO called it "an outstanding post-war example of urban planning and architecture".

Despite Rouen and Caen taking the title of administrative centre for each of the two Normandy departements, Le Havre is the largest Normandy city by some distance.

The city itself boasts a population of just under 180,000, with just under 300,000 living in the extended metropolitan area.

The population of Le Havre has been slowly declining from its high point in the Seventies, partly due to the closure of a major shipyard, partly because of the economic difficulties of the petro-chemical industry, and partly because of increasing mechanisation of the port.

Le Havre has a number of twinning or partnership arrangements with foreign cities and towns.

Two of the most important commercial connections are with the city of Dalian, a major port on the northeast coast of China, and Pointe-Noire in the Congo, which is a port serving the country's oil industry (much of it developed by French companies).

The city is also pursuing deeper partnership arrangements with other major ports around the world, such as Gdansk in Poland, and cities with a specific architectural heritage, such as Niteria in Brazil.