The Mont-St-Michel (St Michael's Mount in English) is an instantly recognisable tourist destination in Normandy - probably one of the most famous in France - and is one of the two Norman locations classed as a UNESCO World Heritage Site (the other is the decidedly more modern city of Le Havre).

Like many world-famous tourist attractions, it is mobbed by visitors from around the world and has had to make allowances for the constant stream of bus and car passengers who travel over the causeway to the base of the island.

Yet, in the same way as places like Neuschwanstein Castle or Venice, the historical magic of the location can still occasionally be felt in a quiet side street or a deserted corner of the cloisters... 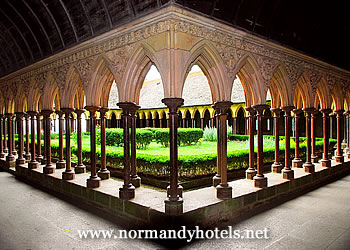 St Michael was not the original saint that was venerated on this low island just off the Normandy coast. It was first settled in the 6th century and there were originally two saints that had sanctuaries on the rock: St Stephen (St Etienne in French) and St Symphorien (a French martyr from the early days of Christianity).

A rather bizarre legend recounts that a local bishop had a dream where St Michael commanded him to build a church on the island and, when he hesitated, poked a hole in his skull with his finger.

Having got the point, Bishop Aubert (later to become St Aubert) created a replica of a famous Italian sanctuary and, as customary at the time, advertised relics related to St Michael once it was consecrated in 709.

The original island name of Mont-Tombe (with a dual meaning of mound or tomb) was replaced by Mont-St-Michel and it became a place of pilgramage.

St Michael is considered one of the most powerful saints (an archangel) and holds the scales of good and evil during the Final Judgement. He became popular in France because of the patronage of rulers from Charlemagne onwards and because a powerful spiritual guardian was immensely attractive in times of turmoil.

Mont-St-Michel and the Benedictines

The Benedictine monastic order settled on the island in the 10th century at the request of the ruler of Normandy at the time. As the amount of pilgrims making the journey to the monastery increased, so did the number of monks until it reached a high point of 60 two centuries later. The earliest religious buildings on the mount were built at this time.

The monastery survived sieges and attacks during the frequent religious wars of the Middle Ages, as well as the Hundred Years' War between England and France. However the religious institution fell into a period of slow long-term decline, with the the income from the pilgrims being diverted into other uses (and pockets) than the support of the infrastructure. 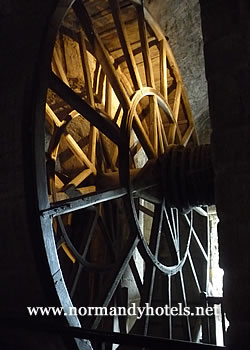 With the number of monks living on the island reduced to a couple of handsful by the end of the 18th century and some of the structures in danger of falling down, the French Revolution was perhaps timely.

Although it was turned into a prison for the next 70 years, the change in use saved the buildings from demolition and, when that phase of its existence was over, it was handed over to the government as a historic monument.

More so than any other location in Normandy, Mont St Michel lacks the feel and administrative structure of a 'real' town - being far more a 'sight'.

Nonetheless it is officially a commune, albeit with an official population of under 50. The closest administrative centre is at Pontorson inland near the Breton border, although many people might class Avranches as the nearest associated town as it is the last decent-sized place passed through by those arriving from other parts of Normandy.

Mont St Michel is twinned with the Japanese community of Hatsukaichi, which contains the World Heritage site of the Itsukushima Shrine, another religious location surrounded by water.