A Visit to Mont St-Michel

One of the fascinations of visiting Le Mont Saint-Michel is the jumble of different architectural styles and purposes within close proximity.

The religious buildings at the top of the mount range from Romanesque through to Gothic monastic styles. Below is the warren of buildings at the base which originally catered to pilgrim traffic in the Middle Ages. And, surrounding all of them, the defensive battlements and ramparts which protected the mount from attempted invasions through the centuries. 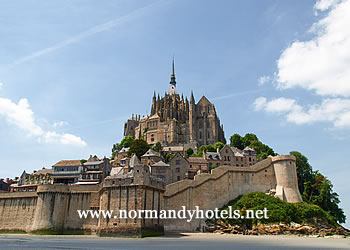 The main attraction on the Mont St-Michel is the abbey, which towers above everything else. The simplest way to get to it is to follow the main drag ("La Grande Rue") as it climbs around the eastern side of the island past the restaurants and souvenir shops. Of course, x thousands of other visitors have the same idea in high season, so this route can be somewhat crowded.

Alternate ways of getting up to the abbey include taking the series of steep steps up to the left past the cemetery and the parish church or alternatively heading up to the right and onto the path along the battlements.

The Abbey and La Merveille

There is a charge for entrance into the abbey and when it is busy it can be confusing as to whether you are waiting in line for entrance or for tickets.

The ticket office also has a small souvenir shop for those wanting to pick up a guide to the buildings on the island.

Entrance into the abbey interior is via the series of steps (the Grand Degré Intérieur) to the western terrace. From here there is a lovely view over the bay (it is frequently possible to spot the groups of walkers crossing the bay on foot when the tide is out) and of the exterior of the abbey church and the Merveille, the massive building next door which housed the administrative areas of the monastery. 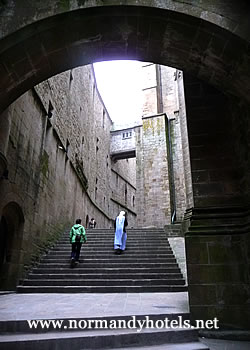 From the terrace the self-guided tour heads into the church, with its different eras of religious architecture, and through into the cloister. The cloister was an area for quiet reflection and prayer but also provided a connection between the religious buildings and the Merveille rooms on their different levels.

The Merveille includes the refectory, the Guests' Hall, the Knights' Hall and the almonry. The last three were for visitors and pilgrims (where you were received depended on your rank). The refectory was where the monks ate in silence and listened to readings from religious texts. The whole three-story building is considered to be one of the most impressive examples of medieval religious architecture - construction was started in the 13th century.

The (In)Famous Omelettes and Other Foods

Every guidebook to Normandy seems to wax lyrical about the omelettes served at La Mère Poulard, which is a restaurant (and hotel) located on the main street near the entrance to the island.

The fluffy giant omelettes - supposedly created by the famous Mother Poulard - certainly look different. Apparently the secret is using lots of butter and whipping the egg yolks before pouring into the copper pans.

The Livre d'Or at the restaurant shows some of the famous visitors to the restaurant who have tasted the delicacy. These days however, reactions appear to be rather mixed from visitors. Omelettes are sold per 100g and, shall we say, are not priced at the cheaper end of the market...

Another local delicacy is the salted lamb - 'salted' because the lambs graze on the salt marshes which surround the island. This agneau pré-salé is available in many of the restaurants which line the main street up to the abbey.

As opposed to other busy tourist destinations, such as Venice where it is possible to 'disappear' into the back streets for a more authentic meal, the only people on the island are tourists and those servicing tourists.

Thus, as far as nourishment goes, either accept eating in a restaurant for tourists or bring your own food with you.

Walking across the Bay

It is possible to walk across the Baie de Mont Saint-Michel to the island as part of a guided group. Local guides offer a variety of different tours, from a short variant of under two hours, through to longer tours taking in the smaller neighbouring island of Tombelaine as well or excursions during the evening.

Please note that it is extremely dangerous for anyone to attempt to walk in the bay on their own. There are areas of quicksand and deep mud as well as the danger from the rapid encroachment of the tides.

Map of the Mont and the Bay

The tourist office site lists the events taking place in the Abbey and other locations on the mount, as well as the tides for the bay.