Rouen - the medieval capital of Normandy

Rouen is the 'big city' of Normandy (although Le Havre is actually bigger in terms of population). It was the old medieval capital of the province when it was one single region and is the current capital of Upper Normandy.

Actually it was a bit more than that at one time, with the Kings of England having a lot more to do with French society - one of them was actually born in the city and it was a centre of politics and intrigue during the Hundred Years' War. 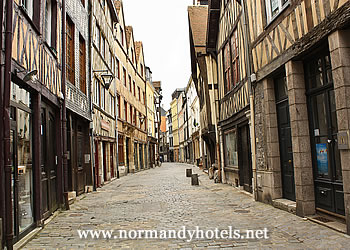 The Romans had originally settled here - their city of Rotomagus was located just to the north of the city centre - and after the collapse of the Roman Empire Rouen came under the control of the Vikings and their network of trading routes around northern Europe.

The city really came to prominence after the invasion of England by the Norman William the Conqueror and, following the unification of France, was the second most important city in the country.

It was the Hundred Year's War and the successive waves of plague which put paid to that period of prosperity. Rouen was lost to the English forces after the defeat at Agincourt (this was the period during which Joan of Arc was executed) and then retaken by the French 30 years later.

The Renaissance period was Rouen's highest point, with economic prosperity leading to the construction of many of the historic buildings in the centre. The wealth of the city was based on trading through its port and several indigenous industries, with textiles being one of the most important.

The French wars of the Reformation and Counter-Reformation between the Huguenots and the Catholic forces saw a vicious civil war between the inhabitants of the city, aided by armies from both sides, before the eventual massacre of many of the Protestants living in the city.

The French Revolutionary period was one of great upheaval but the effects were relatively restrained in Rouen (there was little of the purging and waves of executions that took place with the various 'Terrors' in other parts of France) and during the rest of the 19th century Rouen developed into an industrial and cultural centre for the region.

It was occupied by German forces during the Second World War and, just prior to the Normandy landings, was heavily bombed by Allied planes. It was eventually liberated by Canadian forces with much of the city having been reduced to rubble.

The post-war reconstruction and subsequent redevelopment concentrated on attempting to keep the original outline of the city, rather than indulging in wholesale redevelopment, and much of the attractive old Rouen centre visible today is due to this policy.

Rouen and Joan of Arc

In the days of the war between the English and French in the 15th century, Rouen was the capital of the invading or occupying forces. Joan of Arc had been captured by the Burgundian forces and sold to their allies.

She was kept in the castle of Rouen - the only remaining part of it these days is the tower which is now known by her name (although she was actually housed in another tower) - and eventually taken for a trial which was fairly 'fixed' even for those days. The show trial ended as the authorities wished and Joan of Arc was burnt to death in the market square.

A retrial after the eventual defeat of the English promoted the legend of Joan of Arc and she was eventually canonised and became one of the patron saints of France.

The site of the execution is now one of the central squares of Rouen. 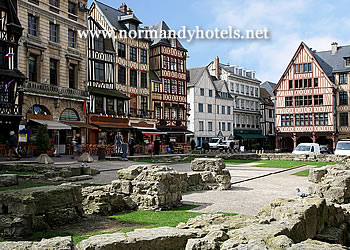 Claude Monet, one of the founders of the French Impressionist school of art, painted a series of more than 30 pictures featuring the facade of Notre Dame Cathedral in the centre of Rouen. (At the time, Monet was living nearby at his house in Giverny.)

Monet worked from rooms that he rented opposite the cathedral and in the series attempted to capture the feel of the different light falling on the intricate Gothic architecture of one of the most famous examples of religious architecture in northern France.

The paintings are now split up in galleries all over the world, although one is in Rouen and another five in Paris.

Rouen is the capital of Upper Normandy and is the third-largest town in the Normandy region, after Caen and Le Havre with a population of around 110,000. It is the 35th biggest city in the whole of France. It is part of the urban 'agglomeration' Rouen-Elbeuf-Austrebeuf, which includes nearly half a million inhabitants.

Rouen is also the prefecture of Seine-Maritime, the coastal administrative region of the two Upper Normandy departements.

It is twinned with a number of towns around the world, including Hanover in Germany, Norwich in the UK and Cleveland in the USA.