Calvados - An Apple Brandy from Normandy

Calvados is the renowned apple brandy from the region of the same name in Lower Normandy.

The Romans are supposed to have discovered the original inhabitants drinking a potent form of cider made from apples but, as with many other alcoholic drinks around Europe, it took monks to formalise the process of planting the crop and distilling the resultant cider to come up with a consistent alcoholic end-product that we would recognise as a forerunner of Calvados. 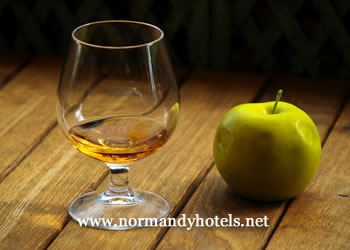 The current Calvados 'taste' is also attributed to Spanish varieties of apple that were introduced to the area in the 16th century. Calvados was always a local's drink, but it became popular in other parts of France (much in the same way as the local cheeses) when the expansion of rail links made it affordable to send goods through to Paris.

Nowadays there are three different varieties which have 'protected area' status (meaning that they are allowed to call themselves Calvados) the first of which was established in the 1940s:

Like normal brandy, the different varieties of Calvados have different grades (for example: Fine, VSOP or XO) which indicate how long a brandy has been aged.