Giverny is one of the most popular destinations for any visitor to Normandy for one reason alone - it was the home of Claude Monet, one of the best-known French artists.

Not only that, but his house is now a museum and the lily-pond that he painted remains at the back of it (although now visited by more than half a million people during the year).

Claude Monet moved to Giverny when he was 43 and lived there until he died in 1926 at the age of 86.

He had originally seen the village from the train. First he moved nearby and then rented and finally bought his home in Giverny. This was the settled part of his life where his paintings were finally being sold by his agent and where he was able to create some of the famous series of paintings of the same subject - many of those being local to Normandy or actually in the water gardens that he created at the back of his house.

The house and gardens are run by the Fondation Claude Monet as a museum which is open in the summer months (April to October, closed on Mondays). The gardens were designed by Monet himself, who spent much time and thought on the displays and organisation. 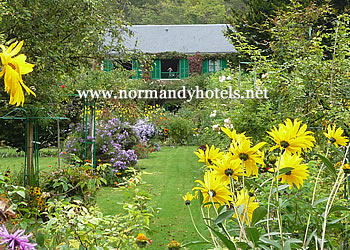 The gardens are actually in two different sections, although reached through a single entrance. Most visitors will first go through the tunnel to the water gardens, with the famous lily pond and Japanese bridge.

The route around the gardens then leads through into the gardens directly at the back of the house, with their more formal arrangements, and then finally into the house itself where there is the garden view that Monet and his family would have enjoyed, as well as the renovated rooms with the painter's collections of prints and pottery from Japan.

The Museum of Impressionism

This important museum is also located in Giverny, along the main village road from Monet's house. Originally known as the Musée d’Art Américain Giverny (American Art Museum), it has now been taken over by the local authorities and is called the Musée des Impressionismes.

Monet, during his time in Giverny, had attracted a strong following of American artists. The museum itself was founded by an American art collector and businessman, Daniel Terra, in 1992 and concentrated, as the name suggests, on American art.

Ten years after Daniel Terra's death in 1996, the managing foundation decided that the museum should be more focused on Impressionism and, following meetings with local authorities, a new board and museum was created, which concentrates on the movement and especially its effect on 20th century artists.

The museum is open from April to October. It has no permanent exhibits of its own but relies on its reputation and location to house temporary exhibitions of some of the most famous Impressionist paintings.

Hôtel La Musardière
123 Rue Claude Monet
27620 Giverny
Tel: 02 32 21 03 18
One of the few hotels/guesthouses in the area, this friendly establishment was built in the 19th century and is located close to Monet's house.
Check Availability

Giverny is located on the River Seine at the south-eastern edge of the Eure departement of Upper Normandy.

It only has around 500 permanent inhabitants but is the largest draw for visitors to Normandy after the Mont St Michel, with hundreds of thousands of people arriving during the summer months.

Giverny does not have a train station, but the nearby town of Vernon is on the main line between Rouen and Paris. There is a navette bus service which meets each train and links Vernon and Giverny.

Drivers should take the A13 south from Rouen (or north from Paris) and exit at the signs for Vernon. Giverny is on the other side of the Seine.

The Giverny Tourist Office is located just off the village road between the Museum and Monet's House in the big public car park.