Trouville - the 'Queen of the Beaches'

Trouville was one of the first Normandy beach villages to become popular amongst the rich and influential inhabitants in the Paris of the early 19th century.

Trips to the seaside and 'bathing resorts' had become popular - Dieppe, especially, was at the start of this boom - and Trouville got its start in this form of tourism from a painter in the 1820s who visited the fishing village and returned with pictures of the seaside that he showed to his friends. 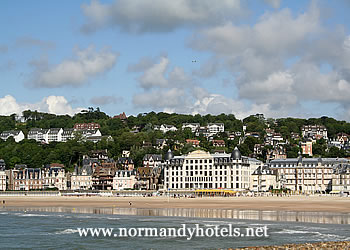 By the time of the mid-1800s Trouville-sur-Mer had become particularly popular with artists and writers. Flaubert fell to a lifelong passion for an older woman there, while Monet, for example, honeymooned in the town and his famous painting "The Beach at Trouville" has grains of sand from the beach in the texture of the brush strokes.

Most of the villas and grand hotels which line the beachfront were built from the 1860s onwards, about the time that Deauville was developing and that a railway link was created to the two towns.

The main sights of Trouville consist of the beach and the villas that line it and which were constructed for the famous visitors of the 19th and early 20th centuries. One of the pleasures of Trouville is spotting the locations of some of the most well-known Impressionist paintings.

At the end of the beach near the river is the casino. Gambling had been allowed in Trouville since the early 1800s and there were two earlier examples of a casino which were built in the same century. The current one was constructed in 1912 and is now officially known as the Casino Barrière de Trouville. (Barrière celebrated its century in 2012 and is one of the leading luxury hotel and casino operators in France. It also has a big presence in Deauville). 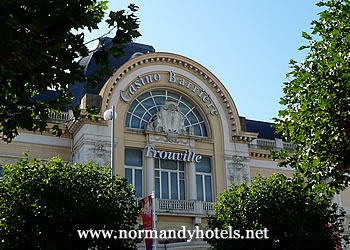 The covered fish market ('Poissonerie') is located near the river and is open daily selling the produce from the trawlers which still operate from the town. The restaurants along the river front specialise in fish dishes - one of the most famous is the Brasserie Les Vapeurs, which was originally opened as a bar in 1927.

Hôtel Saint James
16 Rue de la Plage
14360 Trouville Sur Mer
Tel: 02 31 88 05 23
A small and traditional three-star hotel with a warm welcome set back from the beachfront in the historic part of the town.
Check Availability

Trouville-sur-Mer is a beach resort in Lower Normandy, situated across the River Touques from the neighbouring resort of Deauville.

It is actually slightly larger than its rival across the water, with a permanent population of around 4800 (although the population is slowly declining over the years).

Part of the reason for its early popularity was the easy rail access from Paris in around two hours. This still exists (the train station is just across the river in Deauville) and there are regular services to Paris St Lazare as well as other regional centres.

Road access is also fairly simple, with a good link road from the A13 motorway which crosses Lower Normandy from east to west. Local bus services from Bus Verts de Calvados link the town to Caen and Le Havre. For more detailed information see the travel page for nearby Deauville.

The town is twinned with Barnstaple in the UK and the town of Vrchlabí in the Czech Republic.

The Trouville tourist office is located on the main road running along the river near the bridge across to Deauville.