As a region with a great agricultural heritage and with a shoreline stretching along the northern border, it is understandable that Normandy is home to some of France's best-known foods.

The range and freshness of the seafood on offer is outstanding. Oysters and scallops can be found on many of the restaurant menus, but perhaps the most common of the shellfish recipes is the beach resort staple dish of 'moules marinières' (mussels with white wine and shallots).

The sea also contributes to another Normandy speciality - the lamb which is sourced from the salt marshes near the Mont Saint Michel (known in French as 'agneau de pré-salé'). 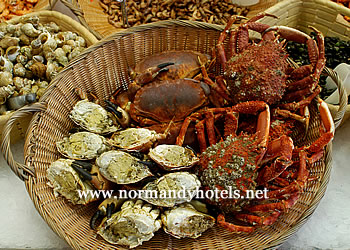 Apples are also a feature of Norman cooking, whether as the main part in a tart or cake or as part of the flavouring in a roast or a stew. They also contribute to the drinks available in this area - the famous Calvados is covered on its own page.

But perhaps the biggest influence is the dairy farming in the area, which took hold when the marshes in many areas were drained during the Middle Ages. Butter and cream are used in a lot of the cuisine in the area, but it is the cheeses from the area which are the best-known. A number of them have their own 'appellation d'origine protégée' (AOP - an EU mark of origin which guarantees certain standards and that foods and beverages come from a particular unique area).

Camembert
The most famous of Norman cheeses, authentic Camembert originates from the small village of the same name near Vimoutiers in the Orne department of Lower Normandy. There is a Camembert Museum in the village which is open all week in summer (www.maisonducamembert.com).

Locals claim the original recipe was handed to a housewife in the village by a priest originally from the Brie area who was on the run during the French Revolution. This enabled the formerly white cheese to be given a rind and allowed it to be kept longer.

Ironically this longer shelf-life increased the popularity of the cheese over all of France (and beyond) to the point that Camembert itself was declared a generic word that the local production had no trademark rights over. The AOP now applies to Camembert de Normandie. 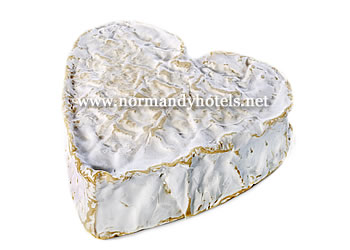 Neufchâtel
Neufchâtel cheese comes from the village of Neufchâtel-en-Bray in Upper Normandy near the border with Picardy.

It is another soft cheese easily recognisable by its distinctive heart shape.

The legends say that this was because the young women used to offer the cheese hearts to their soldier lovers during the Hundred Years' War. Certainly it became equally popular amongst the French and their English opponents.

More religious and less romantic interpretations decided that the shape was a depiction of the wings of an angel.

Livarot
Livarot cheese is made near Camembert to the north of the town of Vimoutiers. The town of Livarot is in the Calvados department of Lower Normandy.

It is one of the oldest Norman cheeses and is not as fatty as some of the other rich neighbouring recipes. The rind is a reddish colour and the cheese is wrapped with bands of raffia.

Pont L'Évêque
This is a square cheese and again the history of its production goes way back into the Middle Ages. It was originally known as an 'angelot' and was only given the name of the town near the Lower Normandy beach resort of Deauville in the 17th century.

During the French Revolutionary period the name changed once again ('Évêque' means 'bishop' in French, which was a disapproved religious term during this time) to Pont Charlier. Later, restored to its current name, the taste for this cheese spread across France and the AOC protection was granted in the 1970s.