The three must-visit locations in the Bayeux area are:

The medieval old town is also pleasant to stroll around. The Bessin area around Bayeux is worth visiting for its famous D-Day beaches, museums and memorials, as well as its heritage and culture displayed in the castles and abbeys in the surrounding countryside. 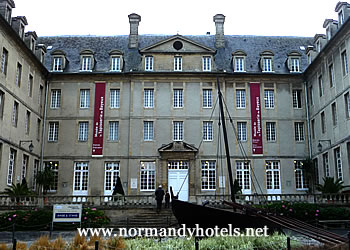 Every UK school pupil is familiar with this tapestry which depicts the victory of the Norman forces over the allegedly treacherous Harold at the Battle of Hastings in 1066.

Essentially it is a massive piece of propaganda created by William the Conqueror's half-brother, the Bishop Odo.

He became the Duke of Kent after the Norman victory and within a few years was the second-biggest property owner in England. Ironically, this iconic French tapestry (now a UNESCO 'World Memory') is an embroidery created by Englishwomen put to work by the bishop.

It tells the tale of how William felt forced to invade England because of the broken oath given by Harold. Among the historic events - the shipwreck, the battle -  are the details which give the cloth its attraction: a miniature Halley's comet and Mont-St-Michel.

Nearly 400,000 visitors arrive each year to view the tapestry. In the busy season the busy shuffling queue along the 70 metres of images woven into it can lead to people rushing their time at the tapestry. Preferable to choose a quiet period and drink in the images from the Middle Ages.

The museum is open for most of the year (closed for a period in January). The daily hours have a lunch break during the winter.
www.bayeuxmuseum.com 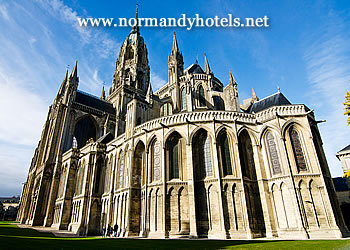 The cathedral dates from the 11th century, although the present building has little from that time.

Much of the Gothic stonework dates from the following centuries, with the tower added in the 15th century.

Historians believe the Bayeux tapestry was designed to hang in the nave of the cathedral. The cathedral offers guided tours during the summer high season. 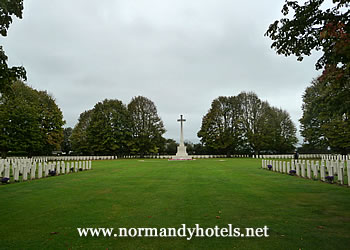 This is the largest British World War II cemetery in France, with just under 5000 graves.

The cemetery is on the western edge of Bayeux near the Museum of the Battle of Normandy.

The graves are home mainly to British soldiers killed in the Normandy landings and later battles although, as the name suggests, there are soldiers from other Commonwealth countries (and non-Commonwealth) buried here. There are also nearly 500 graves of German soldiers.

Facing the cemetery is the Memorial to the Missing. The Allies buried the remains of over 2000 unidentified combatants here.

The nearby museum is well worth a visit, with an extensive display of weapons and equipment as well as interesting audio-visual displays.

The Bayeux Tourist Office is on the northern edge of the pedestrian area in the town centre near the river Aure.