There is not a vast amount to see and do in Honfleur in the sense of major sights. However it is quite simply a very attractive harbour town, with pleasant walks through historic streets and a great place to base oneself as a central point for a Normandy vacation.

The Old Port and the Lieutenancy

The Vieux Bassin is the old inner harbour around which the picturesque terraced buildings with their slate facades that inspired the Impressionist group of artists are clustered.

The inner harbour was built in the 17th century and is now the marina for the town. 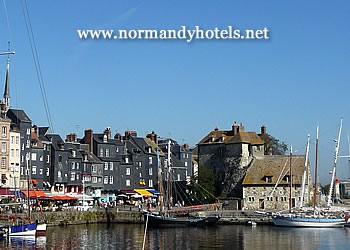 The older building pictured here is the Lieutenance - Lieutenancy in English - and it was here that the town council used to meet and here that a bell could be rung in case of emergency. It is also one of the only remaining examples of the old town walls.

It was called the Lieutenance because in the 18th century (until the French Revolution) it was the residence of the King's Lieutenant.

The Église Ste-Catherine is situated in the old town on the sea side of the port. It was built in the 15th century to replace the Église St-Etienne on the other side of the harbour, which was associated with the English occupation during the Hundred Years' War.

The church is famous for its wooden construction and its design. Created by the local shipwrights, it had more of the air of a market hall than a religious building. The bell tower is a separate building, allegedly so that the church would not burn if there was a lightning strike.

The former Èglise Saint-Étienne was built in the 14th and 15th centuries and is located on the landward side of the Vieux Bassin. It is a stone building with wooden tiles on the roof.

It was deconsecrated following the French Revolution and now houses the Maritime Museum which covers the seafaring history of the town.

The Mont-Joli is the hill to the northwest of the town. From the top there are lovely views over to Le Havre and the Pont de Normandie across the Seine. There is a small chapel near the top (Notre Dame de Grâce) which gives its name to the coast in this area (the Côte de Grâce).

There are a number of other museums in the town:

The Naturospace is not actually a museum, but rather the largest tropical butterfly house in France. It is located on the boulevard which leads out past the estuary shore to the beach.

The Honfleur Tourist Office is located a few minutes walk away from the old port on a busy square.