Despite so much of Le Havre being destroyed in the Second World War, there is still plenty to see and do in the city - not least the newer structures which were created in the post-war redevelopment.

The museum is located on the Seine estuary near the seafront and contains one of the most important collections of Impressionist paintings in France, as well as hosting Fauvist works by Le Havre native Raoul Dufy. It is named after the novelist and former government minister André Malraux and is open every day except for Tuesdays and certain public holidays.

The 'appartment témoin' is a show flat which has been reconstructed to reflect what one of Perret's new apartments would have been like in the 1950s. It is furnished with the mass-produced articles of the time, which would have been considered of a very modern design in those days. Group guided tours can be booked every day through the tourist office.

The Church of St Joseph in the centre of the city stands as a beacon to the memory of the victims of the Second World War. Designed by Perret and finished by his workshop after his death, the church is renowned for its tall octagonal tower (110 metres in height) and the use of stained glass to provide a shifting palette of colour through the daytime. 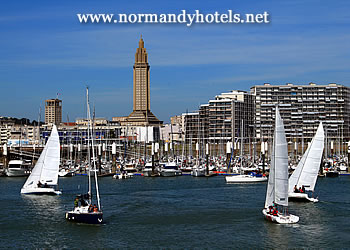 The Church of Notre-Dame, on the other hand, is one of the only remaining buildings which survived the destruction at the end of the war.

Some of the building dates from the 16th century and it is an important link between Le Havre and its history - a link that is sometimes difficult to keep in mind amidst the rebuilt city with its modernist architecture and its forward-looking cultural events. The organ here, for example, was originally donated by Cardinal Richelieu, the important French statesman better-known outside France for his depiction in The Three Musketeers. The Church of Notre-Dame became Le Havre's cathedral in the 1970s.

Le Volcan is part of the cultural centre around the Espace Niemeyer in the centre of Le Havre. Oscar Niemeyer is another modernist architect who works in reinforced concrete (one of the founding architects of Brasilia). 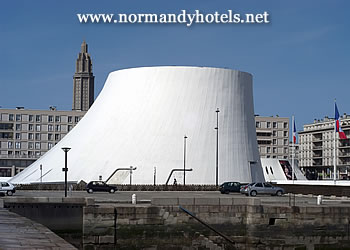 The old Place Gambetta was transformed by him into an open area with a centre for performing arts and other cultural events. The old official name of the Maison de la Culture was dropped in 1990 for the trendier title of Le Volcan. Locals however refer to the structure as the 'yoghurt pot'.

This spectacular bridge over the Seine - which can be seen at the top of the page - was finished in the 1990s and provides a vital transport link for Le Havre and between Upper and Lower Normandy.

The bridge is over 2km in length and is designed to allow shipping to pass underneath while dealing with the high winds which can occur on the Seine estuary. The bridge has a toll and there is a small rest area just before the toll gates on the Le Havre side of the bridge - from here it is possible to view the structure and the estuary, while there are even explanatory walks along the bridge or out into the nature reserve of the estuary marshes. 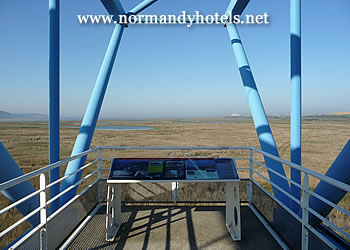 The location of the bridge on the map below can be seen by zooming out using the controls to the left.