Rouen Cathedral is one of the most famous religious buildings in France.

It stands as a major achievement of the Gothic style of religious architecture and its facade was immortalised by a famous series of paintings by the founder of French Impressionism, Claude Monet.

The cathedral is located at the heart of the old city, set just back from the river and near other historic buildings in the Old Quarter. 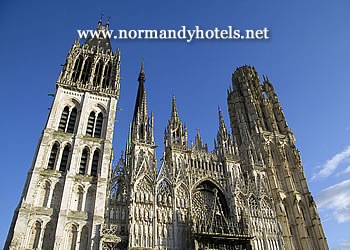 The History of the Cathedral

As so often happens, this cathedral was not the first religious structure on the site. The first cathedral was built at the end of the 4th century but was destroyed during the Viking invasions. William the Conqueror had rebuilt a Romanesque version in the 11th century.

This had a wooden sections to the structure and, in the 12th century, the archbishop Hugh of Amiens decided that he wanted a building made almost entirely from stone. This was the start of the Gothic transformation of the building.

In the year 1200 the St Romain tower, the nave and the facade were all destroyed by fire but the original structure was completed within 50 years. It was extended and redesigned over many years and the facade shows traces of all periods of Gothic architecture through to the Renaissance.

During all of the extension work and redesigns, the fabric of the building was sometimes weakened, resulting in collapses or necessary reconstruction. Natural forces also played a part and over the centuries the cathedral suffered from fire, wind and lightning.

During the religious wars in the 16th century the cathedral was ransacked by the Protestant Huguenot forces. After the French Revolution at the end of the 18th century it was turned into a 'Palace of Reason' and much of the metal taken away and melted down for use in war.

One of the features of the cathedral is the Lantern Tower and its cast iron spire which rises over Rouen. This was built in the 19th century after the original fire had been destroyed by another lightning strike and, for a short time, made the cathedral the tallest building in the world (with a height of just over 150m).

The building was badly damaged, although not destroyed, by bombing in the Second World War prior to the Normandy landings.

The cathedral is open in the summer during the daytime apart from Monday mornings. In winter there is a two-hour break at lunchtime and earlier evening closing times are in effect.

Entry is free, although paid guided tours of the cathedral can be arranged for groups.