As one of the major cities in the north of France, Rouen boasts many historic and cultural sites of interest for the visitor.

Most of them are within the central city area on the northern bank of the Seine. Information about two of the most important are available on the following pages:

Many of the other places to visit are within easy walking distance of the two above, although Rouen does have a good metro tram system for those who are finding getting about a bit tiring.

This small church is located behind the cathedral in one of the oldest quarters of Rouen. 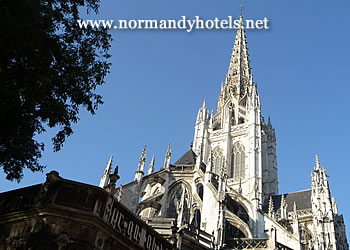 Named after a Breton saint, it was built in the 15th century in what is termed a 'flamboyant Gothic' style of architecture. The arches on the western side are particularly beautiful. The church was badly damaged in the Second World War but has now been restored to its former Renaissance glory.

Just around the corner from the church of the same name, this morbid location is a former cemetery from the Middle Ages (the word 'aître' relates to an interior courtyard). More than three-quarters of the population of this area were killed in one of the periodic outbreaks of the Plague in the 1th century. 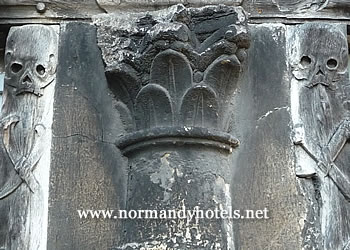 The courtyard itself marks one of the plague pits where the bodies were hastily buried. The walls around the courtyard mark the usage with gruesome carvings.

This massive structure is actually larger than the cathedral and it located to the north of the centre of Rouen. The abbey was originally founded in the Early Middle Ages and a church was built on this spot to house the remains of St Ouen, a former Archbishop of Rouen. The foundations of the current structure were laid in the 14th century and work continued through the centuries afterwards. The abbey buildings next door were used until the French Revolution when they were turned into a munitions factory. They are now used as the administrative buildings for the town authority.

This square is located to the west of the Gros-Horloge. It was the old market place of Rouen and still fulfils that function on most days of the week. It is however more famous as being the location for the execution of Joan of Arc. The ruins which can still be seen near the location of the execution pyre are of an earlier church - the far more modern Église de Ste Jeanne-d'Arc was constructed in the 1970s.