The Château de Caen ('Ducal Castle') is the third of the historic set of buildings in the centre of Caen which date from the days of William the Conqueror.

Located in between the religious complexes of the Abbaye-aux-Hommes and the Abbaye-aux-Dames, the castle was very definitely a temporal power centre. 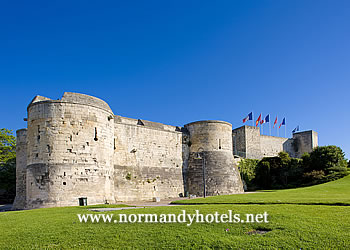 The History of the Castle

Caen Castle - one of the biggest in Europe - was built by William the Conqueror in a prime defensive position on the edge of the small settlement of Caen in 1060. The expansion of the city through the works of William and over the following centuries has meant that the remains are now in the heart of the residential and historic area.

Like the two abbeys to the northeast and southwest, it was part of William's plan to elevate the town to his power-base in Lower Normandy in an effort to exert his control over rebellious nobility in the region.

There is little left of the original buildings: much of the fortifications were completely remodelled in the following years and the original wall around the massive interior was made of wood.

Part of the development of the fortifications involved building stone ramparts and towers. The local limestone was used and this quarrying served a double purpose by creating a dry defensive moat around the castle.

With the transfer of power to France and the battles of the Hundred Years' War and the subsequent religious conflicts the structure of the buildings was changed and changed again.

The military purpose of the fortifications became less important from the 17th century onwards and much of the castle was allowed to fall into disrepair.

The abbey then saw use as a poorhouse, a religious hospital and as a hospice over the next century. The structure of the buildings became worse and worse through lack of management, although the church was renovated in the 19th century. In the Second World War, the Abbey was used as a civilian refuge during the battle for Normandy.

The castle is located in the centre of Caen in between the two abbeys and just outside the pedestrian areas on either side. The castle buildings also host art museums and regular exhibitions while the ramparts gives a good view over the city.

Entry is free into the castle grounds but there is a guided tour organised by the tourist office in French only once a day in high season.