The Ladies' Abbey forms a part of a pair of historic buildings with the Abbaye-aux-Hommes ('Men's Abbey') on the opposite side of the city centre.

In fact it is currently more 'important' than its partner.

The building was protected as an official historic monument in the 1970s and restored in the 1990s. 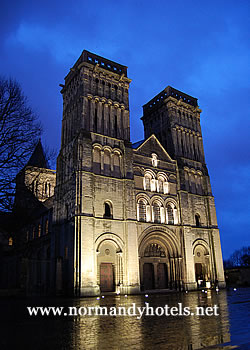 The History of the Abbey

The Abbaye-aux-Dames was built by the wife of William the Conqueror, the ruler of Normandy (and eventually of England) in the 11th century. The marriage of Matilda of Flanders and William was an important political alliance in the shifting regional power elites of the day and, perhaps partly because of that, the marriage was held to be illegal by the Pope of the day (because the couple were too closely related).

The settlement of the dispute included William and Matilda each building Benedictine abbeys as penance for their 'sin'. This not only increased the power and wealth of the Church in the area, but also helped William create a strengthened power base amongst the rebellious nobles of Lower Normandy.

Work on the Abbey was started in 1060 and it was dedicated to the Holy Trinity in 1066 (the abbey church was completed later). William and Matilda also gave their five-year-old daughter to the Abbey and she later became abbess of the religious community.

This encouraged other important families in the area to do the same thing and the Abbey became rich and powerful with land and income (part of it from the conquest of England).

Matilda died in 1683 and was buried under a black marble slab in the church. Unlike her husband, her tomb remained undisturbed over the centuries and still exists today.

Like the Men's Abbey, the Abbaye aux Dames suffered during the Hundred Years' War and the religious conflicts which followed, but these also led to the strengthening and expansion of the buildings.

Ambitious and costly construction work was carried out during the 18th century, but this ended with the French Revolution and the removal of property from the religious orders to the state.

The abbey then saw use as a poorhouse, a religious hospital and as a hospice over the next century. The structure of the buildings became worse and worse through lack of management, although the church was renovated in the 19th century. In the Second World War, the Abbey was used as a civilian refuge during the battle for Normandy.

The Abbaye-aux-Dames is on the western side of the central part of Caen, with the Ducal Castle in the middle and the Abbaye-aux-Hommes to the east. It is easily reached as part of a walking tour around the central city.

Tours are available twice daily in the afternoon apart from major public holidays.