Caen, despite being the site of one of the major battles following the Normandy landings in the Second World War, is still a very attractive and accessible city filled with places of great historic interest for the visitor.

The principal sights are also easy to visit, with three out of the four featured on their own pages in this section being right in the centre of Caen. The fourth is easily reached by public transport. More details about them are available on the following pages:

Of course, there is a lot more to see in the capital of Lower Normandy.

The Caen tourist office is situated not far from the castle on Place St Pierre (address and contact details at the bottom of the page) and provides a photocopied self-guided tour of the central city (for a small fee), which tours around various sites of greater or lesser interest and will probably take half a day for the entire route. 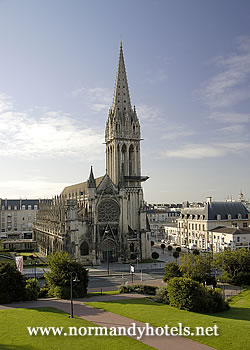 This is the big church opposite the tourist office and facing the castle. (The tourist office is to the right of the church in the photo, which is taken from the castle grounds.) The original church is thought to have been built in the 7th century and the location was originally at the centre of the old town. The current construction was built between the 13th and 16th centuries.

This is the ruined church facing the Men's Abbey across the busy road. Another ancient location with the foundations going back to the 10th century. This was once part of the city wall and, as such, was frequently rebuilt after wars. The current damage dates however from 1944.

Église Notre-Dame-de-Froide-Rue (Church of Our Lady)

This is a church in the pedestrian area with origins dating way back in time. The present construction is from the 14th century.

The small port/marina area is located to the southeast of the the Église St Pierre and the neighbouring Tour Leroy (a tower which was part of the old town wall but is now situated on a traffic island) and a number of the city centre hotel chains are clustered around this busy area. The water leads to the canal and eventually to Oustreheim and the sea. There is a big bus stand here as well, for those looking to use public transport.

Between the canal area and the castle is the Quartier Le Vaugueux, a small area of alleys with some attractive old houses filled currently mainly by restaurants with food from many parts of the world.