The Men's Abbey is one of the most important historic buildings in Normandy and forms a pair with the nearby Ladies' Abbey.

These days it has a non-religious purpose as since 1965 it has been used as the town hall of Caen (called the 'Hotel de Ville' in French). 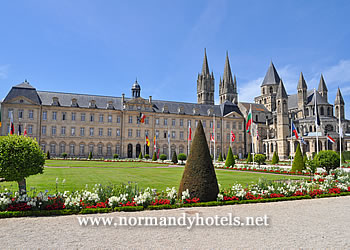 The History of the Abbey

Visitors from the UK are likely to recognise the name of the founder of the Abbey: William the Conqueror (known as 'Guillaume le Conquérant' in French), the Norman invader during the 1066 battles taught in school history books

The popular story runs that the two abbeys were built as a penance for the marriage between William and Matilda in the 11th century. This marriage was held to be 'consanguineous' (in other words, marrying too closely within the same family) by the Pope at the time. Part of the resolution of the dispute was that both William and Matilda built the Benedictine abbeys as penance for their 'sin'.

The more realistic story is that the rule of the Dukes of Normandy was those days weaker in this area of Lower Normandy, where rebellious local power-brokers held much sway. According to this theory, the two abbeys were part of an attempt to use Caen - which was at that time not even officially a town - as a second ducal base which would be closer at hand to potential trouble than Rouen.

Work on the Abbey was started in 1063, it was dedicated 14 years later (although work continued in areas such as the church) and within a decade William the Conqueror was laid to rest there. (His wife Matilda had already been buried in 'her' abbey.)

His body was unable to rest in peace however, as the abbey church where it was buried was pillaged numerous times during the internal religious wars between Catholics and Protestants (Huegenots) in France. Much of William the Conqueror's skeleton was dug up and thrown away and the last bone that remains (apparently a femur) is under the unimpressive grave marker in the present abbey.

However the abbey survived and the building complex was extended during various periods over the Middle Ages. Much of the currently visible restoration occurred in the 17th and 18th centuries, but the monks were not able to finish their work before they were expelled by the forces of the French Revolution.

Eventually the abbey became a school and then the Caen town hall.

The Abbaye aux Hommes is on the eastern side of the central part of Caen, with the Ducal Castle in the middle and the Abbaye aux Dames in the west. It is easily reached as part of a walking tour around the central city.

Various different tours can be made around the buildings, which include various combinations of the cloisters, the abbey church of St Stephen ('St Étienne'), the guardroom and the reception room of the abbots. Tours in English are available only at certain times of the day and only in high season.